I really admire people who decide to do electrical wiring projects around the home, but Please don't do work like this!

Shown Below:
This was an interesting discovery. An existing ceiling fan which was installed without an electrical box.

The wire had been poked down through the ceiling sheet rock.

Without the approved box enclosure there is no legal ground and no way to contain an electrical incident if there ever was one. Also, there was no way to use the appropriate mounting screws for an approved 70 lb rated Ceiling Fan box. Instead, long sheet rock style screws were used. I have found similar occurrences with ceiling fixtures in older homes, however it was quite a surprise to find this violation and several more in a home which had recently been "remodeled", complete with a total kitchen makeover - all installed by an alleged "licensed general contractor", and it all had to be rewired!

The following pictures have some wiring hazards violations and possible hazards. Can you pin point the problems? Go through the pictures and see how you do. 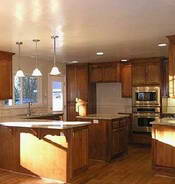