Guide to Wiring Connections when Replacing a Ceiling Fan
Electrical Question: I replaced a ceiling fan and when I turned it on the light worked but when I pulled the chain for the fan the circuit breaker tripped off.

Any help would be greatly appreciated!

This electrical wiring question came from: Megan, a Homeowner from Brooklyn, New York.

Dave’s Reply:
Thanks for your electrical repair question Megan. 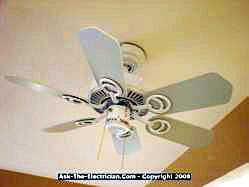 Application: Wiring a Ceiling Fan.
Skill Level: Intermediate to Advanced, Best performed by a Licensed Electrician or Electrical Contractor.
Tools Required: Basic Electricians Pouch Hand Tools, a non-aluminum ladder and Voltage Tester.
Estimated Time: Depends on personal level experience, ability to work with tools and access to the switched outlet wiring and the location for the replacement ceiling fan.
Precaution: Identify the ceiling fan and outlet circuit, turn it OFF and Tag it with a Note before working with the wiring

Common Problems with Ceiling Fan Wiring and How to Fix Them

More about Wiring a Ceiling Fan

How to Install a Ceiling Fan and Wire the Switch