How to Wire Ceiling Fans and Switches

Ceiling Fan Wiring Connections
Electrical Question: Can I connect the wires together at the ceiling box rather than run two hot wires off the wall switch?

I am wiring a ceiling fan and it looks like the red wire at the switch was being used to power the lights and the black for the fan, so why not connect the wires together at the ceiling box rather than run two hot wires off the same wall switch?

This electrical wiring question came from: Steve, from Sunlakes, Arizona.

Additional Comments: Just discovered the site and have signed up for your Electrical How-To Manual.

Dave’s Reply:
Thanks for your electrical wiring question Steve. 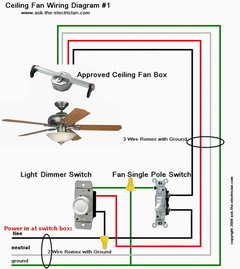 Application: How to Wire a Ceiling Fan and the Wall Switches.
Skill Level: Beginner to Intermediate. This electrical wiring project is best performed by a Licensed Electrical Contractor or Certified Electrician.
Tools Required: Basic Electricians Pouch Hand Tools, a fiberglass or non-aluminum ladder and Voltage Tester.
Estimated Time: Depends on personal level experience, ability to work with tools and access to the ceiling fan location.
Precaution: Identify the ceiling fan circuit, turn it OFF and  Tag it with a Note before working with the electrical wiring.

Wiring Connections for a Ceiling Fan and Switches

Example: Wiring a Switch for a Ceiling Fan Light 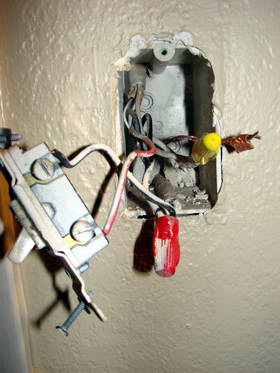