Check Out What Others Are Sharing at Ask the Electrician:
Thanks for providing a wealth of info. Carol from Alexandria, Kentucky

Home Electrical Safety should be a Priority in Every Household 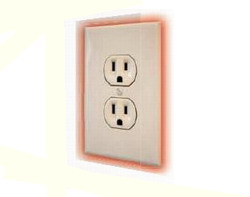 U.S. Consumer Product Safety Commission (CPSC) reports show that approximately 2,400 children are injured in incidents related to electrical receptacles each year. This equates to about seven children every day. Injuries range from electric shock to first-, second and third degree burns, with some rare cases proving fatal.
In response to these statistics the National Electrical Code® (NEC) has been revised (with the 2008 edition)—including a requirement for all receptacles in newly constructed residential units to be tamper-resistant.

Now In Many Places!
Most states and municipalities adopt new code editions within two years, and leading manufacturers of electrical wiring devices for the home have a Tamper Proof and Tamper Resistant receptacle outlets available with a variety of types and styles to choose from.

The adoption of tamper-resistant devices indicate that about 50% of the state have begun adopting these devices starting in 2008.Some major manufacturers have produced tamper-resistant products for years and are well prepared for the Code requirements.

Yes, It Was Necessary An obvious question many might ask is: Was this necessary?

After all, there are plastic outlet protectors, available to parents of small children. Are these parents simply lazy? A reasonable examination of the facts will show that the Code change was necessary, and that parents were not being lazy.

According to information found on the State Farm Insurance website:

• A recent study conducted for the CPSC showed 86% of reported electrical injuries involved children age one to four.

• Mealtime was the usual time at which these injuries occurred.

What The NEC Now Says:
The revision, taking effect with the 2008 NEC, says: “406.11 Tamper-Resistant Receptacles in Dwelling Units. In all areas specified in 210. 52. all 125-volt. 15- and 20-ampere receptacles shall be listed tamper-resistant receptacles. Also in 1997 (according to the State Farm write-up), the Bio kinetics Research Laboratory (at Tampa University) put 37 children to work at playing with plastic outlet protectors.

Here’s what was found:
“Substantiation: 210.52 specifies the areas in dwelling units where receptacles shall be installed. This proposal references those areas.”
A TAMPER-RESISTANT LINE

Several manufacturers provide an outstanding line of tamper resistant products that use a patented, UL-listed shutter system to protect children from injury. However, the shutters don’t impair normal plug insertion, removal, or function.