Problem with a GFCI Outlet
Electrical Question: What would cause problems with outlets in the kitchen that would sporadically shut down and minutes later power would resume?

A friend of mine called me, said he was having problems with 2 outlets in kitchen that would sporadically shut down and minutes later power would resume, one was supplying fridge the other supplied counter outlet ( coffee maker) I noticed GFCI near sink and asked if it protected the 2 outlets, he replied that though it was same circuit it did not feed the 2, he mentioned that he replaced the fridge outlet hoping to correct problem, I checked his work, all was fine and noticed this outlet was on the end of a run. I asked if he heard any buzzing noise like arcing of wires. No was the answer. Told him if I had wired the kitchen that the GFCI would be the starting point and we should look there, as soon as I put my screwdriver to the cover I could hear the arcing, shut power off, removed outlet and this is what I found. The damaged side is the neutral side, wires were not loose, no short on line or load, was wired properly and had been installed many yrs ago ( I?m told) . Also power continued to feed 4 outlets in living room and 1 overhead light. Am I looking at an overload on circuit or bad GFCI. Could it be that simple or am I possibly looking at something more complicated? Any help advice would be appreciated

Kevin, Thank You for Visiting Ask-the-Electrician!

Dave’s Reply:
Thanks for your electrical wiring question Kevin.

Neutral Wire Problem with a GFCI Outlet in the Kitchen

This electrical wiring project is about an Electrical Problem with a GFCI Outlet that is located in a Kitchen. 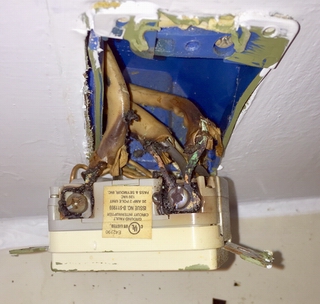 More about Electrical Wiring for a GFCI Outlet

Electrical Wire for the Home

How to Install Kitchen Electrical Wiring

Fully Explained Photos and Wiring Diagrams for Kitchen Electrical Wiring with Code Requirements for most new or remodel projects.

How to Wire Electric Outlets

Wiring Electrical Outlets for the Home