Electrical Question from John about Electrical Inspection of a 220 circuit


Question: Single strand aluminum wire….not sure if I have this or not in last inspection


Question: I just installed a ceiling fan and it appears to be working OK. There were three wires in the ceiling box, white, black and red.


Question: Have only two wires out of ceiling . Ceiling fan and light have two black,one white,one green. What to do with hooking up.


Electrical Question – What to do with Ceiling Fan Ground Wires


Question: Why do I have 3 copper ground wires in my ceiling light fixture? I’m putting in a ceiling fan. Do I connect all 3 wires with the green fan ground wire?


Question: Send the diagrams of motion sensors installed in windows that is my improvements on security measure.


Question: What are the current laws,federal and state for CT. For 2010 for a breaker box


Electrical Question from LaPorte, IN about a Outdoor Light Fixture Problem


Electrical Question from Josh about Buffers That Trip Circuit Breakers


Question: Is it possible to have a light controlled by 4 switches?


Installing ceiling fan on an existing switch. Had to install box and run 14/2 wire from ceiling fan and was running to switch. The light switch only controlled wall plug but was not direct power in. Had 2 wires, a black and white on switch so guessing it was on/off feed for plug only.


What would an electrician charge to put 2 ground fault receptacles in a crawl space ? 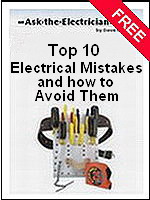